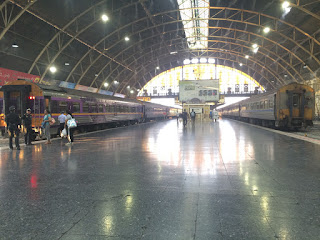 24 hours later and I'm finally able to sleep in a bed that isn't infested with roaches. "Let's take the sleeper train from Bangkok to Chaing Hai," my friend says, "I've heard it's very comfy and cheap!  I set to board a 6pm train at the MRT station Hua Lomphong in Bangkok, thinking that I would sleep most of the twelve hour journey in an air conditioned cabin with a top or bottom bunk bed and when I awoke I'd be in the beautiful northern city of Chiang Mai. Sounds simple enough right? Oh how wrong I turned out to be about two hours into the trip. We spotted our first giant roach friend peeking out between the cushions of the chair. After bringing it to a not so quick (those suckers are fast!) and gruesome death we thought we were in the clear. Wrong again. Over the course of the next hour we battled roaches with OFF Insect repellent and sneakers. I'm sure that must've been a sight for the locals surrounding us. No one else seemed perturbed by the presence of roaches. 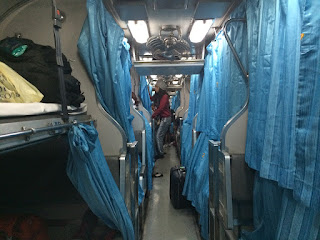 After standing our ground until 11pm, my friends climbed into their cubby holes (aka the top bunks). I'm left standing in a cabin of about forty people all with their bed curtains drawn and sleeping. Hell bent on not waking up with roaches on me or in any of my belongings I decided I wasn't going into the cubby hole and I'd stand the remaining 7 hours. 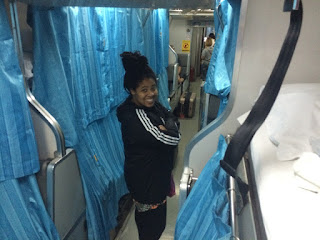 Did I actually accomplish my standing protest? Nope, not in the least. After not spotting any roaches for a while, around 1am I maneuvered my way up the tiny ladder and into my cubby hole. I'm 5'3 and could was barely able to stretch my legs so I sat up right with my backpack next to me reading until 3am and then involuntary sleep started to take over my body. After dozing for fifteen minutes the train stopped abruptly and I was shaken out of sleep. I stayed awake until the train attendants came around to convert the cabin back into seats between 5-6am. Once my friends were awake and alert I felt semi safe to sleep knowing they were watching and dozed for the last 30min. We pulled into the Chiang Mai train station at exactly 7:15am. I think I was one of the first people off that train!


Now of course I understand that I wasn't taking Amtrak and conditions are different in every country. I've mentally prepared for all of sorts of scenarios but I never in my wildest, over active imagination did I think roaches would be coming out of my bed. On the bright side, it seems as if we might've just had a ridiculously dirty car because other travelers I've spoken with since arriving in Chiang Mai didn't spot any creepy crawlers. So don't put off taking the train from Bangkok to Chiang Mai! If you don't want to waste a day or pay another nights accommodation, the sleeper (overnight) train is for you. But if you have time I'd recommend taking it during the day, I've heard the scenery traveling across Thailand is beautiful and you miss all of that taking a sleeper train. You live and you learn! I'm currently in a cramped minivan making my way to the border of Thailand and then on to Lua Prabang, Laos. Hopefully this 18 hour journey doesn't have any roach passengers along for the ride.